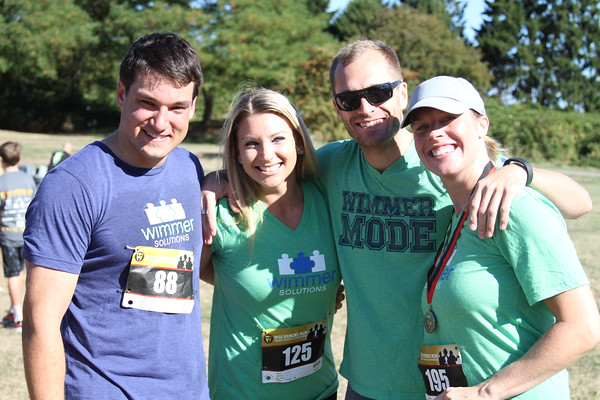 Honoring the Fallen at the 9/11 Heroes Run

Hosted by the Team Jesse Foundation, the Travis Manion 9/11 Heroes Run 5K race was held at Mercer Island’s Luther Burbank Park on Saturday, September 12th. The annual race unites the community to remember the sacrifices of the heroes of the September 11th attacks and the wars fought since. As in 2013, Wimmer Solutions served as the local presenting sponsor.

In its seventh year, the 9/11 Heroes Run is held around the world in 50 locations across U.S. and abroad. They all take place on or near September 11th, and are 100% organized by local community volunteers. Proceeds raised from the runs benefit the Travis Manion Foundation, which “honors the fallen by challenging the living” and offers unique opportunities to veterans and families of fallen heroes to help them accomplish their personal and professional goals. The Travis Manion Foundation also endeavors to directly assist local service members, veterans, first responders, and their families by partnering with local nonprofit organizations where races are held. The Seattle race supports the Team Jesse Foundation, whose work provides education and support to the families of fallen soldiers in honor of SSG Jesse Williams.

The 9/11 Heroes Run series was inspired by Marine 1st Lt. Travis Manion, who was killed by a sniper in Iraq in April 2007 as he selflessly protected his battalion. Before his final deployment, Travis visited Rescue One in NYC—famous for losing almost all of their men on 9/11—and returned home with deeper passion about why he was fighting in Iraq. At its heart, the 9/11 Heroes Run is a tribute to Travis' personal commitment to never forget the heroes of that day.

In this year’s Seattle event, over 35 Wimmer employees, family, and friends came together to join a field of nearly 300 runners and walkers, and many more lent a hand as a volunteer to help prepare for or put on the race.

“We are proud to partner with the Travis Manion Foundation, the Team Jesse Foundation, and many dedicated volunteers to bring this special event to the Pacific Northwest,” said Matt Sauri, CEO of Wimmer Solutions. “We are coming together today to remember those whose service has given us the freedom to live our lives to the fullest. ”Last year, more than 30,000 people participated in races around the world and the Travis Manion Foundation invested nearly $240,000 back into the local race communities to support military, veterans, first responders and their families. This year’s national sponsors of the events include Comcast NBC Universal, JWT, and 31 Heroes. Race series sponsors included Johnson & Johnson, Raytheon, Streamlight, Team Jesse Foundation, and Planetside.

‍The Travis Manion Foundation is a qualified 501(c)(3) that is dedicated to assisting our nation’s veterans and families of the fallen. TMF engages with veterans and families of the fallen in all stages of their personal journeys and offers them unique opportunities to empower them to achieve their personal and professional goals. TMF believes that the best way to honor the fallen is by challenging the living. TMF challenges veterans and survivors to lead the “If Not Me, Then Who…” movement and inspire others to continue the service to community and country exemplified by the nation’s fallen heroes. To learn more, visit www.TravisManion.org.

‍The mission of The Team Jesse Foundation is helping families of fallen soldiers in honor of SSG Jesse Williams. The organization is also committed to supporting the efforts of other charitable organizations helping military families more broadly.

Team Jesse was started in 2007 by Kevin Mincio and Matt Corry to honor Kevin's fallen friend and comrade, SSG Jesse L. Williams. Shortly after the 9/11 attacks, Kevin left a Wall Street job to join the Army and served a tour of duty in Iraq with Jesse, where they became close friends. Before Jesse left for his 2nd tour of duty, after earning a Purple Heart in his 1st tour, he asked Kevin to “look after” his daughter Amaya in the event Jesse didn't make it back. Kevin obliged and Team Jesse is one of the ways Kevin is fulfilling his promise.

Team Jesse grew out of what was initially going to be a summer lacrosse tournament team founded by Kevin and Matt. Made up of former players from their alma mater, UCONN and other friends from the lacrosse community, the team was entered into the 2007 Lax Vegas Lacrosse Tournament. Planning was under way when Kevin was informed of Jesse's death. Kevin and Matt immediately knew that honoring Jesse and raising money for Amaya would be the new mission for our lacrosse team and Team Jesse started to take shape.

With the help and support of family, friends and other connections throughout the lacrosse community, they got to work raising money for Amaya and sharing the story of Jesse, a courageous soldier who gave all for his country.

Inspired to do more in the Fall of 2010, Kevin and Matt founded the Team Jesse Foundation, a 501c3 charitable organization, with the help of Eileen Tang and Heather Hager. The vision of the leadership team is to assist in helping as many families of fallen soldiers as possible by raising money through awareness and events. To learn more, visit www.teamjesse.org