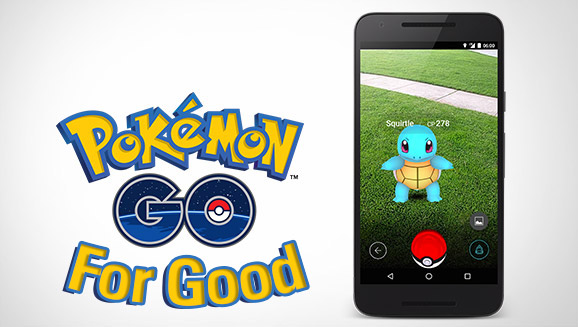 It's only been a few days since Pokemon Go launched on App stores, but I'm sure you've heard plenty about it from your colleagues, friends, or kids. If you don't know, Pokemon Go is a location-based augmented reality mobile game developed by Niantic. The game allows players to capture, battle, and train virtual Pokemon ("pocket monsters") who appear in the real world through the camera on their phone. While it does seem like a silly game and people staring at their phone while walking is dangerous, there are fascinating implications for GOOD things to happen in this now widely used App.

The immediate implications of this game are that it gets people outside and moving. A user MUST be walking around or moving in order to catch a Pokemon. There are reports of users complaining about sore legs and feet from searching for Spearow's all day. FitBit trackers everywhere are overloaded by the increasing amount of steps that their owners are now taking. I foresee a direct correlation in weight loss for users, especially avid users. A few weeks ago, we covered that "gamification" is a great tool for learning - but it's also a great tool for encouraging people to exercise. For example, the first eggs you get require you to walk 2km or 5km for them to incubate. It's based on GPS location, not steps, but driving won't work. You can even do a Pokemon Go Interval training workout.

In addition to exercising, fresh air and sunlight are also immediate benefits of catching Pokemon. I've already seen articles about users saying that their mental health improved in just a few days of playing Pokemon. Vitamin D deficiency is growing increasingly common, and could be linked to several chronic diseases, especially for those of us living in the not-so-sunny state of Washington, but now you can go catch a Charmander while you soak in those rays (don't forget the sunscreen!).Not only that, but it also helps people learn more about their neighborhood (or wherever they're playing). Pokéstops and gyms were adapted from the Portals in the Niantic's older game Ingress, which considered the historical, educational, artistic or architectural value of locations to be incorporated into the game. Each Pokestop or gym has an image and a sentence about the location which might be a local landmark or a business. I'm excited to see the potential advertising opportunity for locations who can pay extra to drop "lures" and encourage users to visit their location. Imagine an event or local business promoting their service or product with their own little augmented reality logo.

Here are several examples of simple ways to use Pokemon Go for good in your neighborhood:

Do you have other ideas for how users, businesses and consumers can use Pokemon Go for good? Send us a tweet!