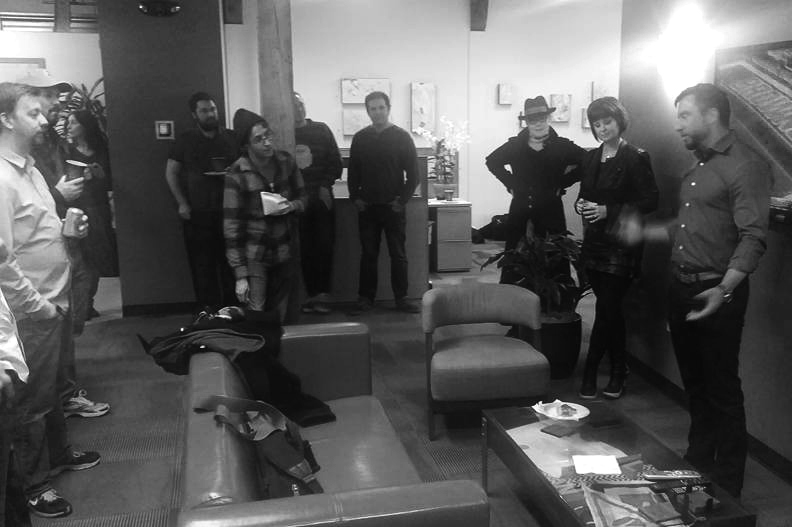 Greetings, Programs! Lisa Weeks here, organizer of the Seattle Game Developers Meetup, fighting for the users on behalf of Wimmer Solutions! I was so thrilled to receive the green light from CEO Matt Sauri to have Wimmer Solutions as the new sponsor of my Meetup, and to generously host us in their amazing office space, complete with pizza and beer!

CEO Matt Sauri introduces Seattle Game Developers to Wimmer Solutions[/caption]The Meetup kicked off with approximately 60 attendees getting their networking groove on, then a warm welcome from Matt Sauri to introduce the developers to Wimmer Solutions, and how excited he is to get even more involved in supporting the gaming industry in Seattle. After Matt’s introduction, the developers were free to continue networking and visit various areas of the Wimmer office—some engaged in one-on-one portfolio reviews with Wimmer recruiters, others enjoyed a presentation from PlayFab CEO James Gwertzman, and then played demos of "Gurgamoth Lives" and "Mad-scien-tile-ology", the winning games from the PlayFab Game Jam!We also featured demos from Eric Nevala, CEO of Wobbly Duck Studios, of their amazing new Virtual Reality game, Spellbound! For some of the attendees, it was their first time playing a VR game using the Oculus headset, and it was great fun to watch! Continuing along the VR theme, we had the CEO of ChronosVR, Ricardo Parker, chat about how ChronosVR is helping developers hone their skills as the VR world continues to gain momentum at the forefront of game design.

Seattle game developer tests out Virtual Reality demo game at Wimmer Solutions[/caption]As a little background about the Seattle Game Developers Meetup, we were founded in February 2013, as a networking group for game developers, designers, artists, sound designers, musicians, and all other related disciplines. This includes everyone from the professional AAA workers to the independents, hobbyists, and those with an interest. We have informal meetings in the Seattle area where people can demo and share their work, spend time working on projects, and interact with others with similar interests. Events from other groups and organizations related to game development in the Seattle area are also posted to this group. For further information, and to join our Meetup, please visit http://www.meetup.com/Seattle-Game-Developers/!Lisa Weeks Brand Engagemancer, Wimmer Solutions

Lisa Weeks is a cyborg composite of 20 years marketing experience in the retail/entertainment/digital media industries. She recently served as the Chief Marketing Geek for GeekWire, serves on the advisory board for several startups, including Fizzmint and PhotoPad, both SaaS startup companies. She also serves as a Committee Vice-Chair with Keiretsu Forum, which funded Telltale Games to $1.4 million in 2006. Prior to her work in the Seattle startup community, Lisa has worked with Nordstrom, Lucas Arts, Cartoon Network, Disney, Mattel and Microsoft. She enthusiastically applies her own “relatively weird” approach to marketing; combining her interests of gaming and technology with her experience of creative branding, design and sales. Lisa’s award-winning product development, merchandising and costume design work have been featured in Vogue, Lucky, and InStyle magazines. She is an accomplished speaker and presenter, most notably "The Economy of Weird" from TEDxSeattle 2013, and is currently the organizer for the Seattle Game Developers Meetup.